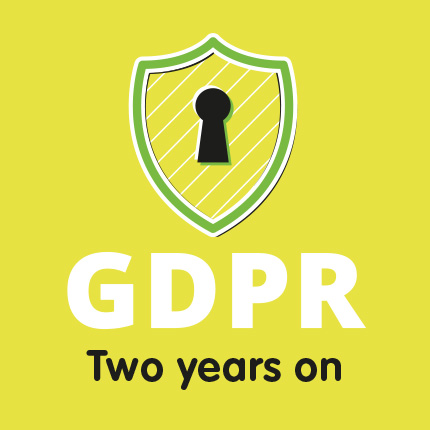 Well, where did that time go?  Two years ago (to be specific the 25 May 2018) you may remember the panic that we all felt as the introduction of GDPR fast approached. It was a necessary introduction due to some scandals involving certain businesses and their mismanagement of the personal data of consumers.  The idea was that it would bring data protection laws in line in the EU, which as we all now live in a digital age was crucial to keep us and our data safe.

It seems that two years on there is plenty of feedback which suggests a very positive reaction to GDPR.

Companies especially in the marketing world were fearing the introduction of GDPR as they felt that they would not be able to communicate efficiently if they had to obtain consent by subscribers.  But it seems that by actively requesting consent and legitimising their subscribers the newsletters and campaigns are now actively being opened rather than being placed into junk email folders. Bounce rates and opt-outs have been significantly reduced, as have complaints and the so called ‘spammers’ are now seen as negative within the industry.

Now for a bit of jargon

After one year of GDPR being introduced, email marketers reported many benefits including an uplift against KPIs – figures taken from the DMA’s Marketer Email Tracker report 2019. Despite initial concerns, campaigns had increased deliverability (67%), open rates (74%), click-through rates (75%) and conversion rates (67%).

With a focus on consent it means that trust levels have increased and recipient engagement has become stronger.  The DMA’s most recent report 2020 shows more than half of marketers (53%) have reported the impact of the new rules as being positive on their email deliverability (only 19% reported a negative impact).

It’s clear now that quality over quantity is the key.

The positive success of GDPR in Europe has been an encouragement for companies in other countries of the world to implement their own data protection laws.  America and Australia among others have been influenced to take action.

In the UK, we are waiting to see what happens with data protection and what if anything will change when we officially leave the EU.  In the meantime, the UK’s Information Commissioner’s Office (ICO), with input from the DMA, is currently drafting a Direct Marketing code.

As always here at Squeezymail we are strict with our policy and only allow companies with an appropriate subscriber process to use our platform.  We do suggest that the ‘double opt-in’ for subscribers is best practice. As mentioned above, get your subscribers in a legitimate manner and they’ll be loyal to you and your company.